Big thanks to my husband for making dinner tonight. It was delicious! It’s that time of year again – rushing around at practices and school will be starting soon too. I had to dash out after work to take Jasmine to practice today and to my surprise while I was still at work I received a text from Seth (aka Joker) that dinner was on him. Fantastic! His text read…
[“JOKER’S BURGER…no meat, jokes on you. Black beans, Red Kidney beans, Sweet Onion, Shiitake Mushrooms, Sun-Dried Tomatoes…with Joker’s special herbs and seasonings.”]
It’s funny because very humbly he added, “I know it’s not as appetizing as your menu items but…” Well I guess the joke was on him because they were amazing!! – It was cute because he was actually nervous for me to try them. 🙂 The flavors were great! Seth is always thinking up ideas and sometimes helps me brainstorm some of my creations. I don’t know specifically what he added (herbs/spices) but the burgers had some great heat which was tamed nicely by the sundried tomatoes. The mushrooms really stood out and were prominent with the beans adding a nice creaminess. They were baked up and served with no buns – check them out above. 🙂

Check out the formed burgers – yum!

Here’s a pic of Mister and I at a wedding we went to last Friday. 🙂 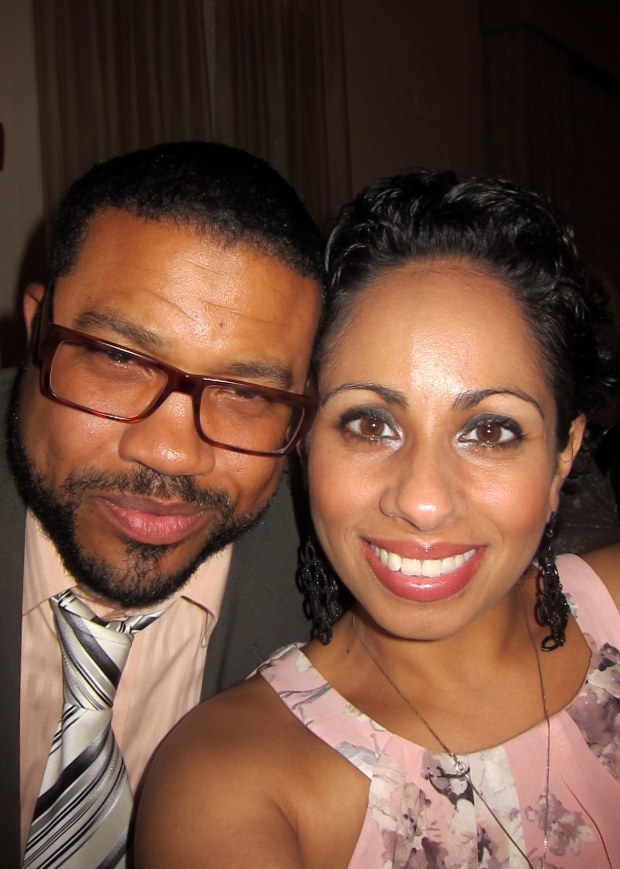 [ Added]
I included this picture in the post because it was just taken last week and I wanted to share a picture of the chef of the burgers and all, although I have included him (his pic) in other posts, this pic above was fresh in my mind. So about the wedding!…
I never talked about the wedding we went to last week. I know the bride was specific about sharing pics of them on social media but I think I can at least share a detail of something that has been on my mind.
I don’t typically cry at weddings, although they are always beautiful. I love going to them, it’s a joy to reflect on our love and marriage too. So I don’t typically cry, right? Not this wedding last Friday, the tears were flowing! Maybe I’m sharing wedding secrets here or something but I have to share this moment because it was beautiful and something I have never seen before.
[The moment I cried]…
This wedding was for a co-worker of my husband so I can’t say that I really knew them personally. I know of stories that he has shared with me of her but I didn’t know her well. One story that was shared was how she had been living with and caring for her elderly grandmother for many years. As I’m sitting there watching the bridal party coming down the aisle I see a little girl, (of course she’s the flower girl, right…), the kid coming down with her poofy white dress and fluffy socks holding a sign but no flowers? Then to my surprise I see an elderly woman coming down the aisle with her rolling walker (rollator), the flower basket… throwing the flowers. I lost it! I could not hold back my tears, knowing the back story of how she had been caring for her. As I didn’t really know her, seeing that was such and intimate moment for me, it showed me how much love, respect and care she had for her grandmother. It was such an engaging moment.
The elderly often get lost and shuffled, sometimes sadly even ignored. My mother has worked in a nursing home for 30+ years, she has such a big heart. Although I’m sure the job itself can be difficult and maybe even the patients sometimes…but I’ve seen that woman take such good care of them as if they were her own parents/family. I’ve seen it first hand as I volunteered there back when I was in High School. She has such strength, love, humbleness, loyalty and respect – she is a good woman and taught me is still teaching me to this day. I love my mommy so much, she jokes and says, ‘when I’m old just throw me in a nursing home’ sorry mom… we’ll see about that. In 20 years I’ll be cleaning your butt just like you did mine 🙂 She has such a good nature.
Even though I didn’t really know the bride I came to know her in that moment. I learned about her nature. Maybe I amplified that moment in the wedding, I don’t know, it did have an impact on me however.
One thing that is certain, we need to take better care of our elderly folks. We can learn so much from them. They are wise and live such simple lives. We tend to overcomplicate things especially at different stages in our life. Some of them have the best stories…

Welcome to Vegan Rescue! I appreciate you stopping by, my name is Jessica Williams, I currently hail from Pennsylvania outside of Philadelphia. I hope to inspire you through my vegan recipes. I’m an avid home chef and enjoy photography also. Vegan since 2011, I take much pleasure in creating, reinventing (veganizing) and indulging in vegan deliciousness with my husband and children.

“All recipes, ingredients and photography on this blog/site are my words and creations - All Rights Reserved and Copyrighted ©. Please be courteous, ask for permission and remember to credit Jessica Williams/VeganRescue.com as the Original Source. Please feel free to contact veganrescueblog [at] gmail [dot] com for inquiries and questions.”